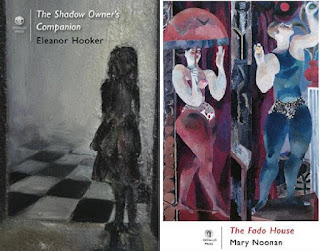 Two Dedalus Press collections are among the four shortlisted for the 2013 Strong / Shine Award for debut volumes of poetry, to be presented at the Poetry Now at Mountains to Sea dlr Book Festival in September.

Both Hooker's and Noonan's collections have already attracted some considerable attention.

"Noonan has a truly unique voice. The Fado House, with its exotic outward journeys running parallel to darker inward paths, is a début worth reading," wrote Jennifer Matthews in Southword, while Lucy Collins writing in The Stinging Fly was struck by the somewhat uncanny atmosphere and territory of Hooker's book.

"Eleanor Hooker’s debut collection, The Shadow Owner’s Companion, is haunted by childhood memories, and by the fears unleashed by imagination itself. its poems grapple with the intensity of this material and with its revelatory potential."

In a year in which we also published the very impressive Before You by Leeanne Quinn, judge Billy Ramsell had a difficult job before him. And the strength of the shortlist is, to be sure, a mark of the strength of Irish poetry today.

The Strong / Shine Award will be presented at Poetry Now at Mountains to Sea dlr Book Festival in September. Details to be announced.