A CAPACITY, and very warm, crowd tonight at Dublin's Damer Hall for the launch of three new titles from Dedalus: Paul Perry's The Last Falcon and Small Ordinance; Grace Wells' When God Has Been Called Away to Greater Things; and Gerard Smyth's: The Fullness of Time: New and Selected Poems.
Introducing the readers, Dedalus publisher Pat Boran spoke of his pleasure to be launching three books that between them emphasized the importance of the role of small presses: to introduce new talent (with Grace Wells' debut), to follow the trajectory of writers in mid-career (with Paul Perry's third collection) and, from time to time, to stop and gather up the best of a extended body of work (Gerard Smyth's 'new and selected').
Among the barely standing room capacity crowd were art gallery owner John Taylor; novelists Claire Kilroy and Jack Harte, and poet/novelist Philip Casey; publisher of The Stinging Fly literary magazine Declan Meade; Literary Editor Caroline Walsh and a number of staff members of The Irish Times, including Shane Hegarty and poet Rosita Boland; Arts Council Literature Officer Sarah Bannan; Ireland Literature Exchange Director Sinéad MacAodha, en famille; Marie Bourke, Keeper and Head of Education at the National Gallery of Ireland; a significant number of students from the Faber Poetry Academy (facilitated by Paul Perry) as well as from other writing workshops throughout the city; family members and co-workers of the featured poets, of course, but also a full complement of enthusiastic poetry readers, whose continued support for the press is a welcome reminder that limited resources don''t necessarily lead to limited vision or connection.
There was also, it must be said, a truly remarkable number of poets present, among them Dennis O'Driscoll, Brendan Kennelly, Maurice Harmon, Aifric MacAodha, John Ennis, Enda Coyle-Greene, Patrick Chapman, Patrick Deeley (with artist wife Judy), John O'Donnell, Hugh O'Donnell, Enda Wyley, Richard Tillinghast, Yiorgos Chouliaras (Press Counsellor to the Embassy of Greece), John F Deane, Pádraig J Daly and Maurice Scully. And no doubt others obscured by the multitude.
Different styles and approaches aside, there are few nights that really feel like a celebration of poetry itself, in whatever shape and form it takes. This was one of them.
Further information on the books: www.dedaluspress.com 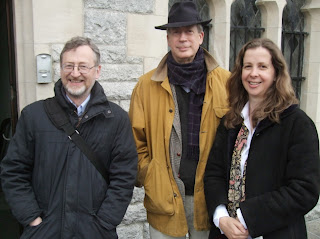 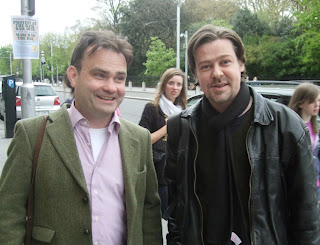 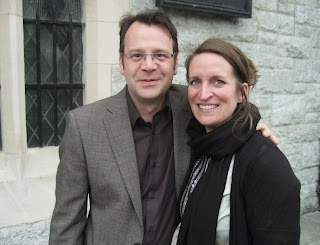 Paul Perry and his wife, Aoife 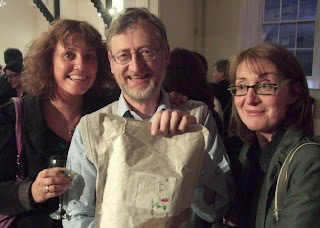 Poets Enda Wyley and Iggy McGovern (with, well, something mysterious in an envelope...) and radio producer (of Sunday Miscellany) Clíodhna Ní Anluain 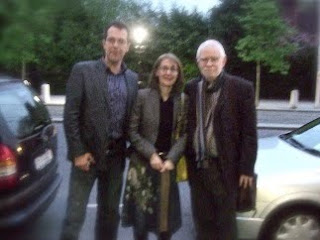 Finally, reproduced here as documentary evidence that all three readers did show up, a hopelessly blurred photo (taken by Enda Wyley) of poet/Dedalus publisher Pat Boran, with radio producer Clíodhna Ní Anluain and Gerard Smyth
Posted by PB at 2:10 AM