As part of a co-operative effort of The Embassy of Greece Press & Communication Office, The Hellenic Community of Ireland & The Irish Hellenic Society, Dedalus Press poet Theo Dorgan read from his recently published poetry collection, Greek, to a capacity crowd at the Teachers' Club, 36 Parnell Square, Dublin 2, on 29 April 2010, a day on which grim tidings from the financial world did not prevent Irish-based Greeks and the many non-Greek members of both societies from showing up in large numbers.

The evening was launched by Her Excellency Diana Zagorianou-Prifti, Greek Ambassador to Ireland, with introductions by Yiorgos Chouliaras, Press Counsellor of the Embassy of Greece. Music was provided by classical guitarist Yiannis Giagourtas. Greek translations of Dorgan's poems, by Socrates Kabouropoulos (who was unable to attend), were read by Dorgan's long-time friend, and Chair of the Irish Anti-War Movement, Michael Youlton. 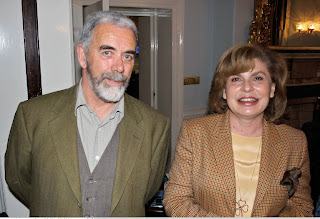 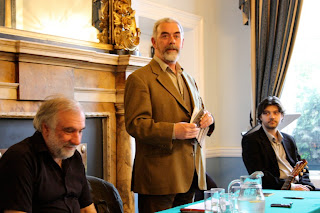 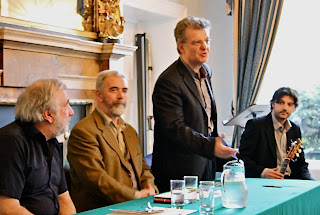 ***
Greek, by Theo Dorgan, is available at www.dedaluspress.com

All photographs © Pat Boran / Dedalus Press
Posted by PB at 12:43 AM

Maith thú, Theo! I'm sorry to have missed what must have been a great evening. Cláir Ní Aonghusa

My sincere congratulations to each one that have arranged and or contributed to this wonderful Poetry event by Theo Dorgan that I had also the previlege to meet.
WELL DONE AND I HOPE THAT THE IRISH/HELLENIC SOCIETY together with the Greek Hellenic Community and the Greek embassy Press Office will enrich us more with many other events in the near future.
Kind regards to all.
Dimitris Tsouros