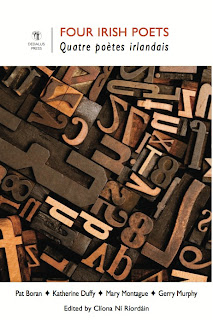 The launch at the Centre Culturel Irlandais in Paris on Bloomsday (June 16, 2011) of Four Irish Poets / Quatres poètes irlandais was a major new development for the Dedalus Press, if not in fact for literary publishing in Ireland, in that the bilingual selection of the work of four Dedalus poets was produced and published in Ireland but directed towards an international, French-speaking audience.
The launch event, introduced by editor Clíona Ní Ríordáin, and hosted by Sheila Pratschke of the Centre Culturel Irlandais, attracted a large crowd, representing both Irish residents of Paris and beyond and a significant number of French educators and academics with a specific interest in Irish writing, as well as a general audience attracted by the idea of an event focused on living Irish writers on what Ní Ríordáin described as Ireland's second national holiday, the celebration of Bloomsday.

Four Irish Poets / Quatre poètes irlandais is edited by Clíona Ní Ríordáin and features a bilingual selection of poems by Pat Boran, Katherine Duffy, Mary Montague and Gerry Murphy, and is available from the Dedalus Press website as well as through usual suppliers. Sincere thanks to Sheila Pratschke and all of her warm and welcoming staff for their help. 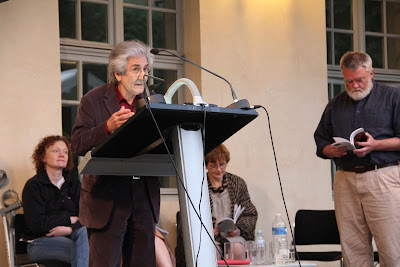 Celebrated translator Paul Bensimon reads from his translations of the work of Dedalus poet Gerry Murphy, with, L to R in background, poet Mary Montague and editor Clíona Ní Ríordáin 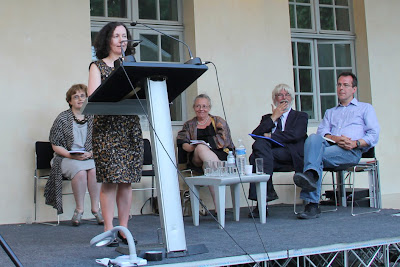 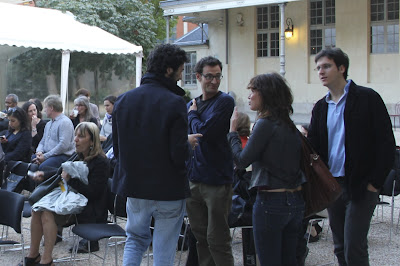 A selection of the large audience which turned up to celebrate the launch of Four Irish Poets / Quatre poètes irlandais at the former Irish College in Paris on Bloomsday. Grateful thanks to Bord Bia for providing refreshments.
Posted by PB at 1:03 PM