Launch of Billy Ramsell's 'The Architect's Dream of Winter' 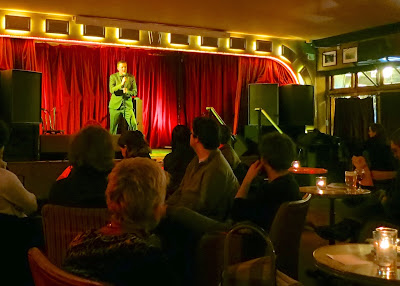 A great night in Cork's very welcoming Crane Lane Theatre on 21 November for the launch of Billy Ramsell's second collection of poems, The Architect's Dream of Winter. Preceded by short readings by poet Doireann Ní Ghríofa, together with guitarist Stephen Moore, and Conor MacManus reading from his hilarious prose memoir, Ramsell was in fine form and, as ever, delivered the poems from memory with a sense of engagement and passion that is hard to resist.

Introducing him on the night was poet Paul Perry who has kindly allowed us to publish here his introductory remarks.

Billy Ramsell’s second collection of poetry has been crafted with a steely and implacable patience. While his contemporaries are producing books every two or three years, here is a poet who has waited six years to deliver his second book - a book which in its holistic execution looks less like a sophomore offering, and more like the completion of a mature vision.

What The Architect's Dream of Winter does is to detail and chronicle an extraordinary time in our history - a digital revolution no less, and how it impacts on an individual consciousness - the architect of the title perhaps - with a technical bravura, which is at the same time wry, poignant, and fabulously rich in its various lyric textures.

With an introductory epigraph from Racter, an artificial intelligence computer program that generated English language prose at random, we know we are in the hands of a poet who has both something serious to say about the nature of communication and composition and wants to have some fun doing it.

In that sense, Billy Ramsell’s concerns are both personal and at the same time global; there is from the opening salvos a playful suggestion of the digital high-jinx to come and what might be at stake too.

What struck me most on a first reading of The Architect's Dream of Winter is how beauty survives in a digital world, a world where we are told to ‘connect ourselves via the ports’ and then ‘relax’.

Here are hyper-textual conundrums, computerised terrain, servers, coding, monitors, systems, bugs, and discs and within and despite or in spite of all of the computer-speak is the sheer beauty and command the poet has over language - Quote

‘This butterfly is stitched for winter’

‘Remember lover you are made from data’

There are rhyming couplets, villanelles, ballads, and interactive hyper-text in this collection; there’s digital souls, humour and humanity, a dazzling array of poetic gifts and if as Kay Ryan says the poem is a suitcase that can never be emptied, than Billy Ramsell’s poems come not from the suit-case of a clown as Kay Ryan thinks of the source of her own work, but from the digital hub of a super-information highway, and whatever by-ways, lay-bys and boreens it might or in fact will take us down.

So what Billy Ramsell does is to take the dictum of the protagonist of Swiss novelist Max Frisch’s Homo Faber that ‘Technology... is the knack of arranging the world so that we don't have to experience it’ and turn it into something else, something more along the lines that technology is after all what makes us more human - of course I want to avoid as one critic put it the heresy of paraphrase, but I do want to alert you to the significant questions that TADOW asks, and they are namely - how do we live, how do we survive in a world which is mediated by digital technology, how do virtual environments enhance our experience of each other and our selves - or do they in fact diminish them?

These are poetic quandaries, but also philosophical questions of this fine collection which is brave, savvy and whimsical enough to announce in one poem - ‘I outsourced all my memories to machines.’

Now I don’t want you to get the idea that TADOW is not without fun, homage and history - look to the poems for the ‘aboriginal, liquid bodied’ Christy Ring, or the perfect fusion of man and machine in the reels of Pat McGlinchey.

Or look for the outrageously funny prose-poem Section 3: The Unseen Poem which ends with a set of ‘exam’ questions, one of which reads ‘The poet William M. Ramsell has never been to St Petersburg. Write a paragraph describing how this affects your understanding of the above piece.’

We’re still waiting for Alan Jude Moore, a long time Russian resident, who launched his fourth collection Zinger in Dublin last night to get back to us on that - but for now let me commend to you the two binary staples, the dna and source code, of the collection which are the literally breath-taking poems ‘They dance to keep from falling’ and ‘Ahead vast systems hunger’ - both rhapsodic, mesmerising and hypnotic in their cadence and typography - both poems containing a parallel italicised instruction where we are told that that our current session is timed to expire while at the same time the speaker of the poem reminds us of the ‘salt tang on the lips’.

It’s this ingenious incongruity, the physical salt tang together with the eponymous architect who has a screen clean as her own mind which makes BR a poet who people are reading and talking about.

Everybody I know who reads poetry reads Billy Ramsell. They know his presence as an editor, his commanding voice, both on the page and the sheer physicality of it in person; but there’s a subtelty to that robust presence, a tantalising jouissance in language, an essential and compelling gift we are lucky to be here tonight to share.

The Architect's Dream of Winter is available from www.dedaluspress.com
Posted by PB at 12:54 PM