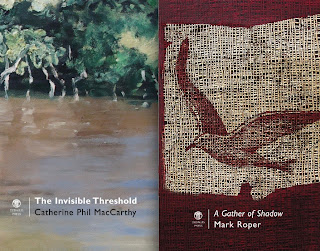 Two of the five shortlisted titles for the 2013 Irish Times Poetry Now Award are published by Dedalus, and we're delighted at the recognition received by these fine collections, the only Irish-published books to make the shortlist.

Catherine Phil MacCarthy’s The Invisible Threshold is her first title from Dedalus, while Mark Roper’s A Gather of Shadow follows on from Even So, his New and Selected Poems published by Dedalus in 2008. Excerpts from both of the books can be found on the Dedalus Press website here.

The other shortlisted titles are Harry Clifton's The Winter Sleep of Captain Lemass, which is published by Bloodaxe Books,  James Harpur’s Angels and Harvesters and the late Dennis O’Driscoll’s Dear Life, both from Anvil Press.


The winner, which receive an award of €2,500, will be announced on September 7th at the Mountains to Sea DLR book festival (see www.mountainstosea.ie).
Posted by PB at 12:50 PM