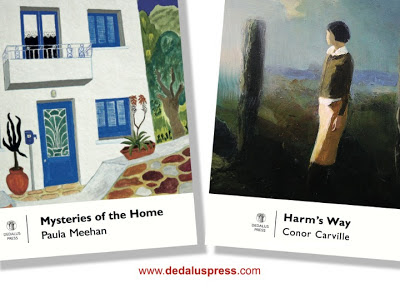 Already back in full swing after the all-too brief Christmas/New Year break, we're happy to confirm details of our first launch event of 2013 with the publication of books by Conor Carville and Paula Meehan. The launch takes place at the Irish Writers' Centre, 19 Parnell Square, Dublin 1, on Tuesday 26th February, 21013, from 7.00 pm.

Conor Carville was born in Armagh City. Educated at Trinity College Dublin and Oxford University, he is currently Associate Professor in English and Creative Writing at the University of Reading. His critical work on cultural theory and Irish writing, The Ends of Ireland: Criticism, History, Subjectivity, was published in 2012. In 2006 he received the Patrick Kavanagh Award for Poetry.

Harm's Way is his debut collection of poems and reveals an astonishing brio and passion for language, as well as a coherence and maturity of vision seldom found in a first collection.


At night the deep, invisible tugs
awaken even us, the heaviest of sleepers,
like whatever impels across the mirror
the glass that begins to touch and nudge,

now and now, the scraps of tracing paper,
hastily inked, that hover above the tain
and their own obscure reflections. If the stain
that deforms the tatty silver

seems to come between you and your image,
it doesn’t, is rather embedded out here,
the lens of an unmanned camera
watching from its place beyond a language

torn and set adrift upon the patent surface.
Let’s watch the papers flutter, their veering pass
in the wake of the shuttling glass
may let you do little but hastily parse

each disappearing word, each lithe phrase.
Yet elements, for all that, fall into place
and let us glimpse a world, a space
beyond the blur of flesh. And then it is erased.

Paula Meehan was born in Dublin where she still lives. She studied at Trinity College, Dublin, and at Eastern Washington University in the U.S. She has received many awards, including the Marten Toonder Award for Literature, The Butler Literary Award for Poetry, the Denis Devlin Memorial Award and the PPI Award for Radio Drama. She has published five collections of poetry, the most recent being Painting Rain (Carcanet, 2009).

Mysteries of the Home is the first generally available edition of a book originally published for UK readers only. It gathers into a single volume poems from Meehan's seminal mid-career collections, The Man who was Marked by Winter (1991) and Pillow Talk (1994), both of which won considerable praise from critics and readers alike. They show an artist at the height of her powers producing work of “remarkable candour and ... stunning lyricism” (The Colby Quarterly).

My Father Perceived as a Vision of St Francis

It was the piebald horse in next door’s garden
frightened me out of a dream
with her dawn whinny. I was back
in the boxroom of the house,
my brother’s room now,
full of ties and sweaters and secrets.
Bottles chinked on the doorstep,
the first bus pulled up to the stop.
The rest of the house slept

except for my father. I heard
him rake the ash from the grate,
plug in the kettle, hum a snatch of a tune.
Then he unlocked the back door
and stepped out into the garden.
Autumn was nearly done, the first frost
whitened the slates of the estate.
He was older than I had reckoned,
his hair completely silver,
and for the first time I saw the stoop
of his shoulder, saw that
his leg was stiff. What’s he at?
So early and still stars in the west?

They came then: birds
of every size, shape, colour; they came
from the hedges and shrubs,
from eaves and garden sheds,
from the industrial estate, outlying fields,
from Dubber Cross they came
and the ditches of the North Road.
The garden was a pandemonium
when my father threw up his hands
and tossed the crumbs to the air. The sun
cleared O’Reilly’s chimney
and he was suddenly radiant,
a perfect vision of St Francis,
made whole, made young again,
in a Finglas garden.

I heard Paula read that poem on a special occasion. I shall never forget it.