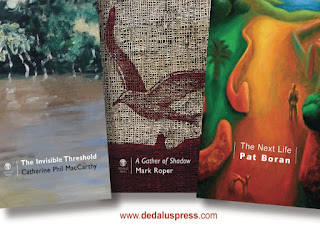 The Invisible Threshold, by Catherine Phil MacCarthy, A Gather of Shadow by Mark Roper and The Next Life by Pat Boran represent new work by three mid-career poets who have already made significant names for themselves in Ireland and abroad.

The evening will be introduced by Joseph Woods, poet and Director of Poetry Ireland.

As well as being popular writers in their own right, all three poets are also well known for their encouragement of new writers and upcoming voices, facilitating workshops and classes throughout the country. As there is likely to be a sizeable turnout for the event, patrons are advised to note the starting time and perhaps come a few minutes early.
Posted by PB at 11:20 AM