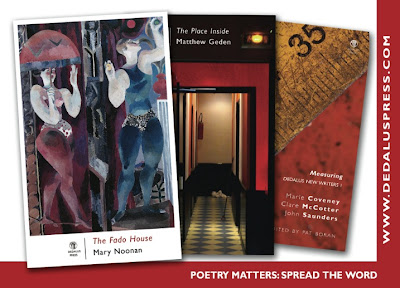 Until not so long ago, the vast majority of poetry and small press imprints in these islands on a regular basis issued 'introductory' volumes featuring the work of perhaps a handful of up-and-coming writers, offering a more extensive selection of their work than might easily be accommodated in a literary journal or magazine.

In fact, a huge number of writers began their publishing careers in this way, and it's something of a mystery that the practice seems to have disappeared over the last decade or so.

Certainly, if our experience at Dedalus is anything to go by, the level of submissions of unsolicited work shows no sign of diminishing: if anything – and no doubt fuelled in part by a wide range of economic and social reasons – the volume of new work we receive on an ongoing basis is now greater than ever.

A small press, of course, can only do so much. And even if all of the new work received was great (which sadly it isn't), it would never make sense to publish everything.

One of the reasons, of course, is that publishing is not just about making and distributing books (or CDs, or whatever the end product might be). The job of a publisher is to choose and, crucially, then to get behind the things that have been chosen, to try to get them in front of readers and listeners, whoever and wherever they may be, to do what can be done to earn them some attention in the world.

With this in mind, Dedalus has decided to do its bit to revive that hugely useful (perhaps even crucial) 'introductory' volume tradition with the publication next month of the first in a new, annual series, Dedalus New Writers. Entitled Measuring: Dedalus New Writers 1, and featuring a selection of work by three very impressive up-and-coming poets, Marie Coveney from Cork, Clare McCotter from Derry and John Saunders from Offaly, this first in the series is both a statement of confidence in the wealth of new writing out there but also the beginning of a journey in which we hope to bridge the gap between individual magazine and book-length publication, though we also intend to draw attention to writers associated with other small presses, in the certain belief that good writing, wherever it comes from, deserves our support.

Measuring: Dedalus New Writers 1, will be launched on Monday 21 May, 2012, at the Irish Writers' Centre, Parnell Square, Dublin 1, along with new books by Mary Noonan (her debut collection, The Fado House) and Matthew Geden (The Place Inside). Every September, beginning this year, we intend to put out a call for submissions for the next volume in the series (make sure you follow us on Facebook or Twitter and sign up to our Newsletter so we can keep in touch).

In the meantime, the success of any poetry publication, perhaps especially an 'experimental' one like this, depends on the support of readers, reviewers, critics, booksellers and, of course, other writers. Ask for it in your local bookshop or library. If you read it, post a notice or review somewhere: there's plenty of space on the web! If like us you belief that poetry matters, spread the word.
Posted by PB at 1:58 PM

I feel that's a great idea. I can't write poetry, only comic verse, but feel your efforts will be of great benefit to those who do. Cangratulations

This is a superb initiative, Pat and Raffaela.

My first publication was via the Authors and Artists introduction series produced by the Windows team of Heather Brett and Noel Monahan; it was a huge encouragement and gave a platform to a wide range of poets and visual artists.

Good luck with it - I look forward to buying my copy.