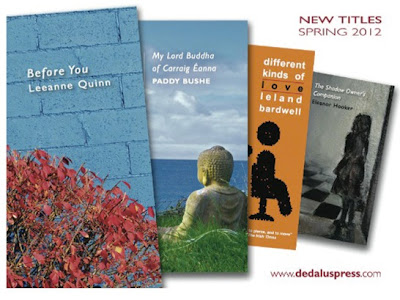 A truly stunning, capacity crowd turned out at the Irish Writers' Centre last night (Lá Fhéile Bríde, 01 Feb, 2012) for the first Dedalus launch of the year, one of the most heartening and uplifting events we've been involved in for some time. On the bill were debut poets Eleanor Hooker (The Shadow Owner's Companion) and Leeanne Quinn (Before You), along with Paddy Bushe, following 2010's Voices at the World's Edge anthology with his latest collection (My Lord Buddha of Carraig Eanna) and poet, novelist and playwright Leland Bardwell, turning 90 this month, and last night launching a reissue of her 1987 short story collection, Different Kinds of Love, twenty-five years after its first appearance.

Present on the night was novelist and short story writer Evelyn Conlon whose own collection of stories My Head is Opening was one of the three books published all those years before (along with Ronit Lentin's Night Train to Mother). Below is a photograph of Conlon and Bardwell, holding a photograph taken at that first launch.

Always reliable Dedalus supporters, including poetry enthusiast and champion Niall McMonagle and stellar bookseller Ruth Webster from Books Upstairs, had to make room a number of distinct but happy-to-mingle posse, among them supporters of Paddy Bushe, including his wife Fíona, Drogheda-born Leeanne Quinn's parents and friends, at least half a dozen members of Leland Bardwell's family who had made the trip from the UK, and Kerry, as well as friends from Sligo who included poet and novelist Dermot Healy, and his wife Helen, and fiction writer/memoirist Brian Leyden; while a vocal contingent from Nenagh and environs travelled by bus to support Eleanor Hooker, among them her husband Peter and brother Ollie.

The recently remodelled Irish Writers' Centre looked wonderful under coloured stage lighting (not to mention spotless and superbly run by its team of volunteers!) and, no doubt aided by the traditional association with Saint Brigid and poetry, the night had about it a real sense of celebration of the power and importance of poetry and good writing.

As usual, we recorded the proceedings and, when the world slows down a little, will get it edited and up on iTunes as part of our ongoing AudioRoom: New Writing from Ireland podcast. 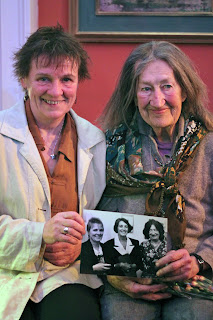 L to R: Novelist/short story writer Evelyn Conlon together with Leland Bardwell, holding a photograph taken of themselves (and Ronit Lentin) on the first publication of Bardwell's short story collection Different Kinds of Love twenty-five years ago. 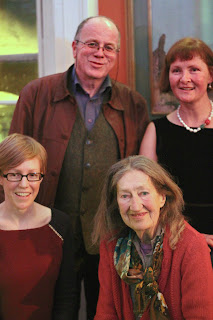 L to R (back): Paddy Bushe and Eleanor Hooker, with (front) Leeanne Quinn and Leland Bardwell at the launch of their respective books at the Irish Writers' Centre, 01 February 2012
Posted by PB at 9:37 PM