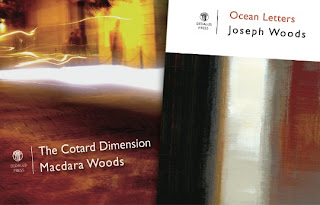 May 24th 2011 sees the launch of two new poetry titles from the Dedalus Press, The Cotard Dimension by Macdara Woods and Ocean Letters by Joseph Woods. Macdara Woods has published with Dedalus for many years and his selected poems, Knowledge in the Blood appeared from Dedalus in 2000 and was reissued in 2007. His most recent collection, Artichoke Wine, was published in 2006. Towards the end of last year, Dedalus Press issued Joseph Woods' Cargo, bringing together the poems from his first two out-of-print collections and Ocean Letters will be his first new work with Dedalus.

The launch event takes place at The Irish Writers' Centre, 19 Parnell Square, Dublin 1 at 7.00 pm on Tuesday 24 May. Further details about the books will be available shortly at www.dedaluspress.com.
Posted by PB at 12:02 PM